Connect Across the Void

Nate Ragolia, Co-Founder – Nate was labeled as “weird” early in elementary school, and it stuck. He’s a lifelong lover of science fiction. In 2015, his first book, There You Feel Free was published by 1888’s Black Hill Press. He’s also the author of The Retroactivist, published by Spaceboy Books. He founded BONED: A Collection of Skeletal Writings. He created The Illiterate Badger and Lark & Robin comics. He also writes articles on Medium, and dabbles in fiction, poetry, and screenplays.

Shaunn Grulkowski, Co-Founder – Shaunn has been compared to Warren Ellis and Phillip K. Dick and was once described as what a baby conceived by Kurt Vonnegut and Margaret Atwood would turn out to be. He’s at least the fifth best Slavic-Latino-American sci-fi writer in the Baltimore metro area.  He’s the author of Retcontinuum, and the editor of A Stalled Ox and The Goldfish, all for 1888/Black Hill Press.

Amanda Hardebeck, Chief Editor – Amanda has been a sci-fi & film disciple since birth. When her older brother handed her a copy of Dune for her birthday 20+ years ago, her zeal for science fiction took off. She holds a Bachelor of Arts degree with a major in English Literature and a minor Women’s Studies from Purdue University. She reads, tweets, loves Canada and is a roller derby referee for her hometown team. 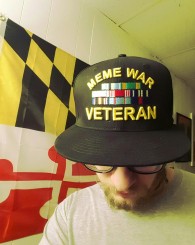 TJ Stambaugh, Art Director – After receiving several commendations for his bravery as a battalion commander in the Meme Wars, TJ retired to Catonsville, MD, where he paints and enjoys movies you have to read. He’s the founder and El Presidente of MoleHole Radio. 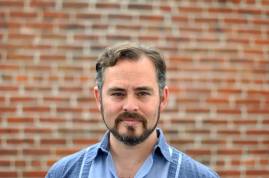 Antoine Valot, Graphics Bot – Antoine is a 2015 Nexus™ series Replicant from the Tyrell Corporation, communications/design model. He enjoys designing book covers, nitpicking about words, functioning within his operating margins, and making the most of the two years he has left to live.